He worked as a research assistant for the MITRE Corporation in Massachusetts. Since Mitre was a defense contractor, Diffie was able to avoid the Vietnam war. In 1969, he went to the Stanford AI Labs to be a research programmer where he met John McCarthy. Then in May of 1973, he left the place to have independent research of cryptography with his girlfriend and future wife, Mary Fischer. They went to the Thomas J. Watson Laboratory in Yorktown Heights to meet up with the current cryptography team. They recommended to get in touch with a professor at Stanford, Martin Hellman.

Diffie got in contact with Hellman and he decided to hire Diffie as a part-time research programmer. In 1975, they became aware of Ralph Merkle, a student at the University of California who had been working on a protocol for public-key cryptography since 1974. His work was cited when Hellman and Diffie in a paper they submitted in their path-breaking "New Directions in Cryptography" paper presented in 1975 and published in the following year. This paper had the fundamental ideas of public key cryptography, breaking the government entity controlled monopoly over cryptographic technology. Their solution is known as the Diffie-Hellman key exchange. From their, he was a manager at a Northern Telecom in California until 1991. Then he became an engineer at Sun Microsystems Laboratories in California until November 2009 when he became the vice president of the company. Now, Diffie is a member of the technical advisory boards of BlackRidge Technology and Cryptomathic. 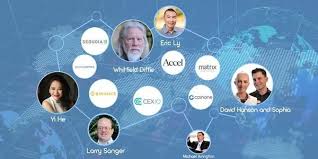